The
View from Initialized

Given current market conditions, the baseline metrics required to raise a Series B have shifted. Here’s our advice to founders on how to navigate a downturn.

“The sky is falling!”

“Raise more capital at once!”

In recent weeks, there has been a lot of chatter about how to prepare startup founders for this market correction. That conversation reached a fever pitch last week as public markets took a sharp turn for the worse, and, by and large, stayed there. Then, several prominent groups in the venture capital community published their own doomsday warnings to add fuel to the fire.

But why do public markets even matter in the venture business? Several reasons:

This has been an especially brutal month to be an investor in any stage, public or private. While I appreciate all of the recent reports, opinions, and Tweet threads about surviving the next downturn, I have been encouraging portfolio companies not to panic. Instead, founders should think about creative ways to extend runway instead of rushing to raise capital.

Any slow down with VC funding will be precipitated by LPs pulling back on their investments in venture funds. As I mention above, most LPs have a portfolio that includes a significant amount of public securities. However, the recent downturn in public markets has meant that the public portion of these LP portfolios has likely dropped significantly. That means their percentage allocation to alternative assets, including venture, is higher than their targets.

In short, funds will have a more challenging time raising capital.

As I told Fortune a few weeks ago, I saw major LPs pulling out of venture entirely, not just scaling back their commitments in 2008. However, this time around, I am optimistic that LPs will not abandon this asset class because venture capital funds have become a long-term strong, performing sector, and many have experienced distributions recently.

Fewer LP dollars means GPs need to manage pace better and be more selective. So, raising capital could be more difficult for companies and, almost certainly, valuations will compress. More importantly, it also means that portfolio companies may be impacted because their customers are pulling back their spend.

What does this mean for startup founders who are in the fundraising process or looking to raise in the near future?

Michael Seibel had this advice for YC founders last week: economic downturns often become enormous opportunities for the founders who quickly change their mindset, plan ahead, and make sure their company survives.

While I agree with the general sentiment of extending runway, I disagree that running out to raise capital at this moment is the right response.

Runway extensions can be accomplished in a myriad of ways:

Personally, I think that any rush to raise right now would be viewed as negative signaling for nervous VCs. VCs are clearly exhausted from the last two years of crazy bullishness and learning to operate during a pandemic. Most were already looking forward to taking some time off this summer, even before the market conditions took a nosedive.

My suggestion would be to explore the above measures, take a couple of months to work on your pitch, and wait for the markets to settle down. Of course, if you are presently at a three to six month runway, you have already probably been planning your fundraise and I am certainly not saying to stop the processes.

I also think those who suggest getting to five years of runway are insane. This is tantamount to saying, “why don’t you shut the business down for three years?” Only a tiny percentage of venture-backed private companies raised that much capital recently.

Revising Today’s Baseline Metrics to Raise a Series B

A year ago, I published a blog post titled, “The Metrics You Need to Raise a Series A.” As I wrote in the post, while there seems to be a wealth of information about both publicly-traded companies and what you might need to close the first round of funding, there was less transparent data for in-between rounds.

Last year, my goal for the Series A article was to open up our books to show you what we’ve seen internally with our own early-stage companies that have successfully raised follow-on rounds. Many founders in our network told us the advice was helpful, so we put together some data to compare and contrast with Series B benchmarks this year.

Most of the companies we used in that survey were able to raise a Series B round (as opposed to a Series A extension), and many had done so in the last two years. Our associate Julianna Vitolo compared the pre-COVID era Series B metrics to similar stats from January 2020 to December 2021, which were not surprisingly characterized by higher valuations and weaker fundamentals for SaaS and marketplace businesses. We then blended those numbers with pre-COVID metrics for the purposes of this analysis.

The founder-friendly market conditions that had persisted over the past ~14 months had been influencing our advice to founders trying to raise Series B rounds. However, and this is a big caveat, the market downturn has changed the game.

The metrics we pulled still work, but the valuation multiples will likely track public market comps more closely. As a result, companies around or below the ‘OK’ spectrum may need to raise Series A extensions or flat rounds.

We are also advising our early-stage founders during this time to see this as an opportunity to build and invest when others are running for the hills. Garry Tan always reminds us that Airbnb was born out of the last recession. So use this time to spot opportunities that can change the trajectory of your company in the decades to come.

Now is also the time to make smarter decisions in leadership instead of following a herd mentality. Our president and partner, Jen Wolf, will be sharing some advice on how founders should think about conserving capital, layoffs, and leading with empathy and compassion amid the chaos. 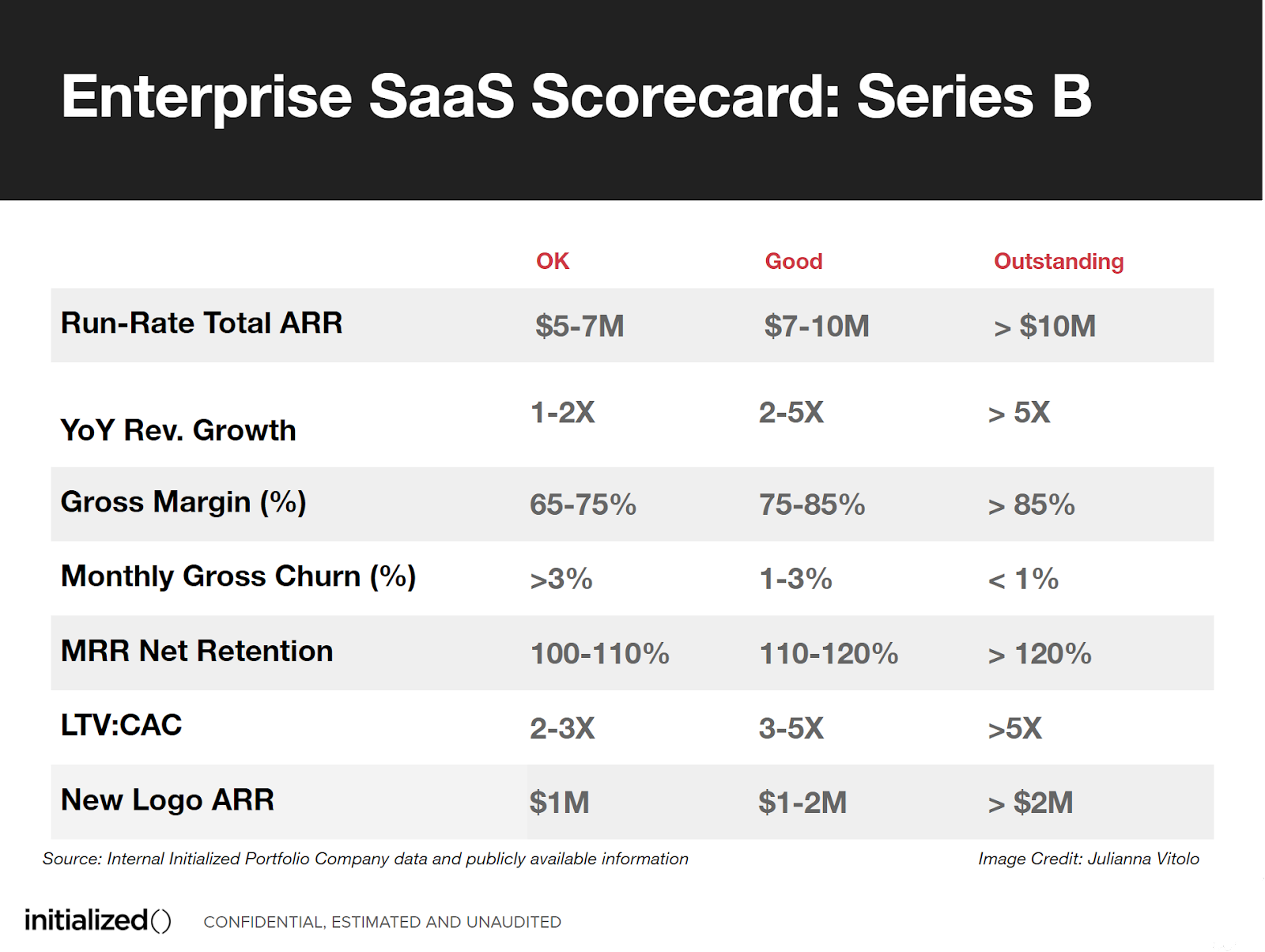 This is a category in which it is easiest to normalize metrics and gather data. Some examples in our portfolio include companies like Rippling, Envoy, WorkRamp, and Time by Ping.

These are all examples of how software is “eating the world” and revolutionizing areas of operations that were traditionally manual. We surveyed 29 SaaS companies within our portfolio and calculated the min, the max, the average, and the median for each of these key stats across the companies evaluated dating back to the Fund’s inception in 2012.

Historically, middle of the fairway SaaS companies that successfully raised a Series B were generating an average of $7-10MM ARR. The median post-money valuation from 2018-2021 was ~$180MM, representing ~20x multiple on average ARR. While we show here that average monthly gross churn was as high as 3% in some cases, most companies had minimal churn in the range of 1-2%, and the majority boasted MRR net retention rates of well over 120%. 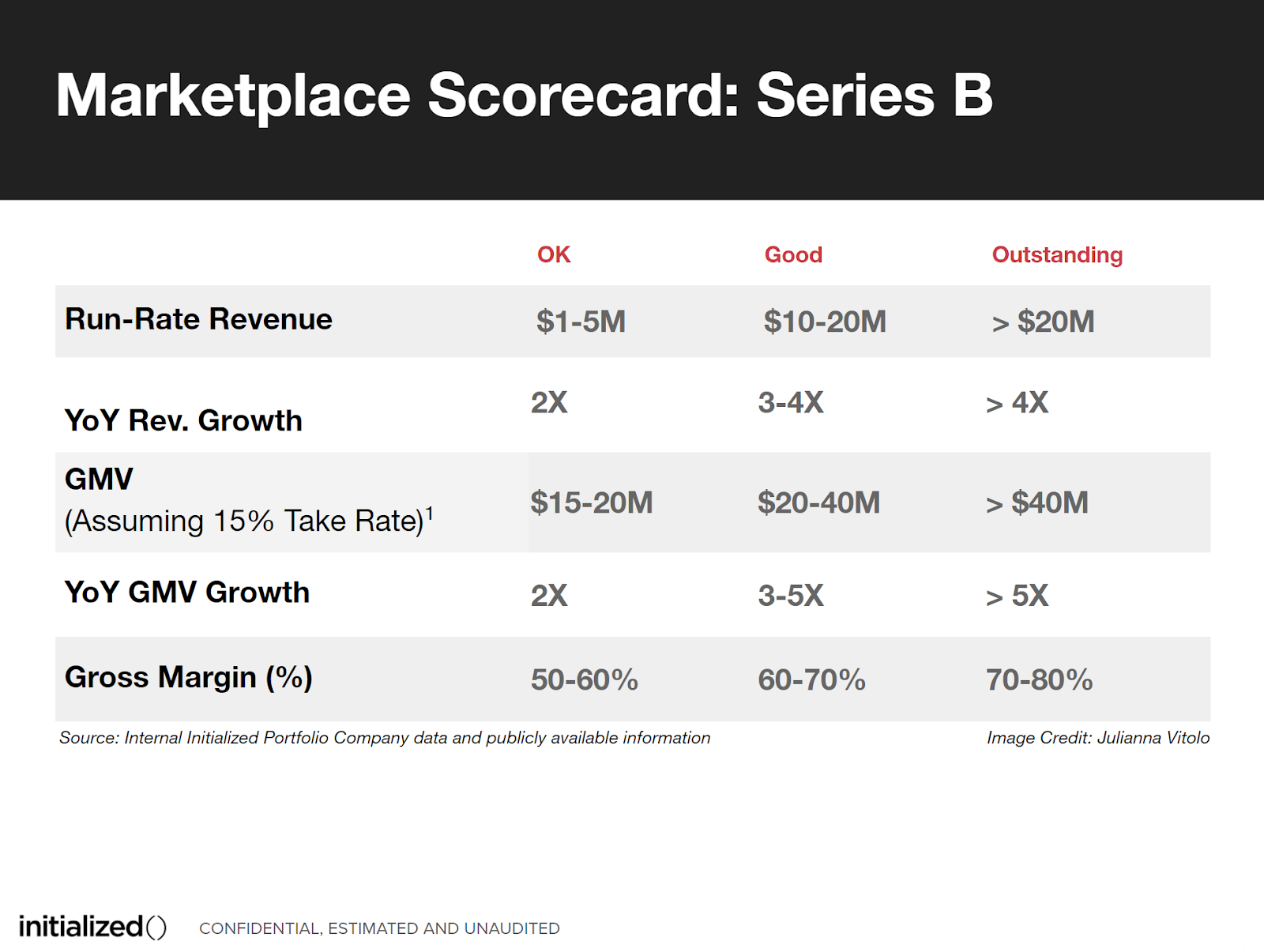 I started my VC career investing in e-commerce marketplaces like Wish and Coupang, and over the last five years at Initialized, I’ve worked with and invested in B2B marketplaces like SkySelect, Reibus, and Tundra as well as other service and labor-based marketplaces like The Mom Project, Kinside, Curri, and Papa.

We surveyed 14 marketplace companies for this analysis and found that the average scale required to successfully raise was significantly larger – nearly 2x larger – than that of Enterprise SaaS businesses that reached the Series B stage. Given differences in the business model and monetization structure that tend to translate into lower average gross margins of 60-70%, marketplace businesses had more to prove out in order to be considered ready for this funding round. The median post-money valuation from 2018-2021 was ~$170MM, representing ~11x multiple on average run-rate net revenue and 5-6x average GMV. 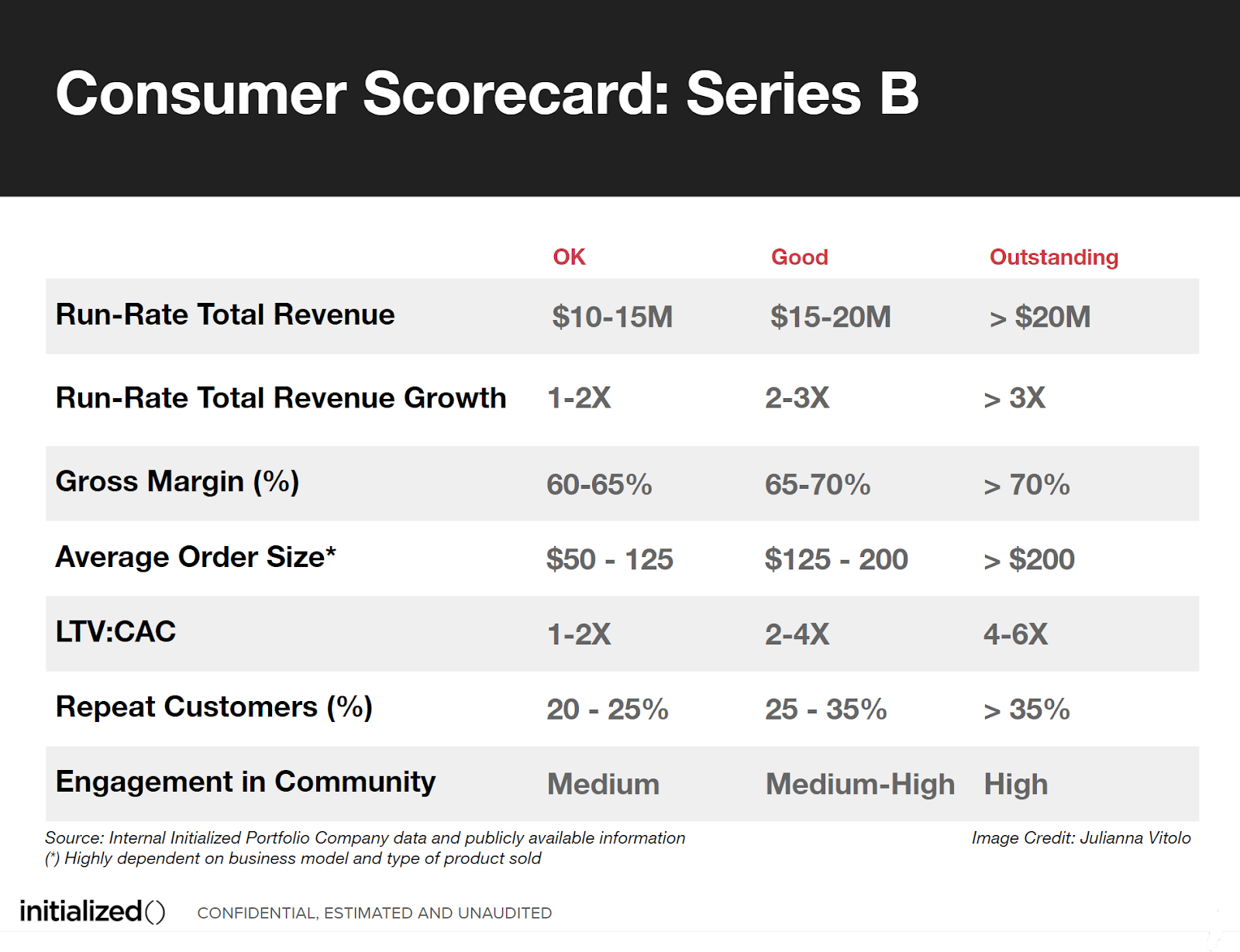 In my time at Initialized, we have made several direct-to-consumer investments, including Eclipse dairy-free ice cream and Atoms, a company best known for its sneakers. In particular, I led our investment in A-Frame Brands (I am also on the board), a company developing personal care brands for underrepresented communities such as KINLÒ and Proudly.

We looked at the metrics of more than 11 companies. Here’s what we found:

Growth-stage investors are extremely focused on a business’s ability to convert a first-time consumer into a repeat customer. As heightened data privacy regulations have continued to drive customer acquisition costs (CAC) higher in recent years, a higher percentage of repeat customers directly signals a company’s ability to accrue a higher LTV per customer. This strength is depicted within the metrics of the best DTC companies – average LTV:CAC ratios of ~5x, and repeat customers of >35% clearly denote a brand’s defensibility and are reliable indicators of lasting success. Interestingly, the scale of the average DTC companies that raised a Series B round was in line with that of the average marketplace businesses, obtaining run-rate revenue of $15-20MM. The median post-money valuation from 2018-2021 was ~$160MM, representing ~9x multiple on average run-rate revenue.

Extend Runway, But Not by a Panic Fundraise

Given current market conditions, the baseline metrics required to raise a Series B have shifted. With talk of a potential recession and economic tightening policies underway, VC firms have begun to scrutinize new deals from a more defensive position.

Many companies and founders have continued to seek capital, but fewer rounds are successfully closing. Carta, Crunchbase, and TechCrunch have all cited a decline in the total number of Series B rounds closing during Q1 2022 relative to the same time period last year. Within this same period, the prevailing data shows that round sizes and post-money valuations have also decreased.

Raising in the current environment will be more difficult, and the valuations will experience some downward pressure. As a result, companies with solid metrics, long runway, and controlled burn will likely choose to wait for more favorable conditions, while companies with more pressing cash needs may be forced to take a hit on valuation in order to extend runway.

Identifiable proof points and quantifiable traction are now more important to showcase, as less emphasis is placed on a startup’s potential and more attention rests on proven execution.

Consider and understand the trade-offs between growth and capital spend for your business; focus on underlying fundamentals and metrics; and engage in measures to extend runway in these turbulent market conditions. Don’t let a panic fundraise poison the waters — be thoughtful and take some time to pull the data together, craft your story, and practice your pitch before heading out there.

With assistance from Julianna Vitolo and Candy Cheng